3D cell models and organoids provide a better rep-resentation of in vivo tissue or organ function. For the last three decades, researchers have been perfecting the formation and maintenance of various 3D models for understanding both disease and normal physiology (1-3). Some of the limiting factors have been the ability to perform complex assays easily and quickly with these precious samples especially patient-derived material. Also, when manually performing drug treat-ments and assays in 96-well plates, one is limited by the number of readouts per sample. The manual treatment, staining, and processing of spheroids and organoids is typically labor-intensive and prone to disrup tion or loss of samples.

In this application note, we report the use of our mi-crofluidic-based Pu·MA® System to perform automated assays using 3D cell models. The spheroids in this study HeLa (cervical carcinoma line) and HepG2 (hepatocyte carcinoma line) were incubated with and without com-pounds for 24−48 hours in the Pu·MA System. After drug treatments, the spheroid media was collected for secreted factor analysis. The spheroids were then stained and imaged within the flowchips using a confocal microscope. Other cell viability measurements or downstream analysis can be performed.

Pu·MA System and flowchips have been designed for a streamlined workflow as shown in in Figure 1. This consists of:

The system architecture and use of pneumatics to move fluids provides gas exchange to the sample chambers within the incubator environment.

Figure 1. Schematic of the Pu·MA System workflow for automated organoid assays, in situ staining and imaging.

An automated organoid assay protocol for staining of cancer spheroids was done using the Pu·MA System (schematic shown in Figure 2). Cultured HeLa cell spher-oids were stained for 2 hours in the flowchips within the Pu·MA System and then imaged within the flowchips us-ing an ImageXpress® Micro Confocal Imaging System (Molecular Devices, Sunnyvale, CA), as shown in Figure 3. Images were acquired using widefield or confocal aquisition as previously described (3), with a 10X Plan Fluor objective or 20X Plan Apo. A stack of 7-15 images separated by 10-15 μm was acquired, starting at the well bottom and covering approximately the lower half of each spheroid. Z-stack of images covered 100-200 μm for spheroids.

We show that the streamlined automated staining protocol combined with high-content imaging produced high quality confocal data. The spheroids imaged within the flowchips showed no compromise in image depth and quality.

To demonstrate the multi-readout capability of the Pu·MA System, two different cancer spheroids HeLa, and HepG2 cancer cells were assayed for cell viability and cell death in response to the effects of selected cytotoxic drug treatments. The assays were performed within the flowchips.

HeLa spheroids, control or individually treated with two different drugs valinomycin (1μM) or staurosporine (1μM) for 22 hours, were stained for 2 hours and then imaged within the flowchips. Images acquired are shown in Figure 4. Numbers of total, live, and dead cells for control and treated with valinomycin or staurosporine were determined from the image analysis data and shown in the bar graph.

The media from the HepG2 spheroids treated with staurosporine was collected during the assay for subsequent secreted factor analysis. Changes in spheroid function was assessed by Vascular Endothelial Growth Factor (VEGF) levels measured in the collected media using ELISA. This showed good correlation to the effect of the staurosporine treatment. (Figure 5C).

These applications demonstrate the Pu·MA System can:

Figure 4. Toxicity analysis with HeLa spheroids. A Confocal image HeLa Cells control and treated (either Valinomycin or Staurosporine) samples. Control and treated HeLa spheroids, stained with nuclear stain (Hoechst, Blue), cell viability stain (Calcein AM, Green), apoptotic stain (Ethidium Homodimer 1, Red) and imaged within the flowchips. The panels below show detailed image analysis of the spheroids as observed within the flowchip. Image analysis was performed either in 3D or using the 2D Projection (MaxPro) image of confocal image stacks. B Bar graph indicating numbers of total, live or dead cells upon treatment with Valinomycin 1μM or Staurosporine 1μM.

In this application note we have demonstrated capabilities of the Pu·MA System 3D to perform:

Using streamlined workflows and Pu·MA System protocols, we showed staining and imaging of two different 3D cell models in response to different drugs and drug concentrations. We showed that with increasing concentration of drug treatments we could quantify phenotypic changes in the cells, such as changes in cell death and in secreted factors all within physiologically relevant conditions with minimum perturbation to the samples.

This work was done in collaboration with Dr. Oksana Sirenko (Molecular Devices, Inc.)

The Pu·MA System can automatically perform complex assay steps using proprietary microfluidics. All reagents are loaded into flowchips and then incubation, media exchanges, cell secretion sampling and other steps are executed by the system program (schematic of fluid transfers is shown in Figure 6A).

The key features are:

Figure 6. Pu·MA System microfluidics. A Schematic showing typical protocol steps available with the Pu·MA System. All steps are performed automatically inside an incubator. B Schematic of the protected sample chamber and fluid flow. 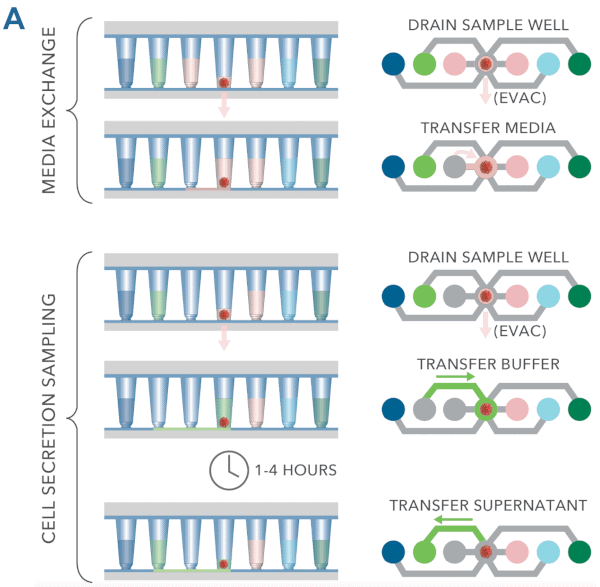